i know it's not but it's a bit annoying to deaktivate it every start ;)

Maybe you can do somethink with this (German) Pic.

If not i will just list the game so it okey ;) 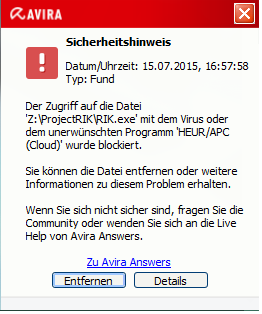 You can add an exception in Avira's options, i had the same issue.

Just another false positive.. I could triple check but tbh it's just the billionth time an antivirus program makes a mistake. Nothing to worry about :)

There's multiple reasons as to why it could do false positives.. Antivirus scanners usually have a bunch of fairly stupid "algorithms" that checks for "viruses". If there's some part of the game's code that is similar to something used in a "virus" or similar, then it triggers. I recently added an asynchronous API on the clientside for example, which runs web communication in a separate thread (used for the ingame rankings view), stuff like that could easily be misinterpreted as a virus. And about 100 other things. And because RIK.exe is updated often, even if they decided that an earlier version was safe, the new RIK.exe would have a different checksum etc, and it wouldn't recognize it any more. Aaand RIK.exe is also a relatively rarely used "program", hence it's usually not whitelisted or alike. So there's basically nothing to be done about it afaik, I could submit the .exe to them and explain stuff, and have them whitelist it once. But in most cases that would go out the window in the next update. So just whitelist it yourself :)

Here's the full info for what avira detects: http://www.avira.com/en/support-threats-descriptio...

PS: I sent the file to Avira with a short explanation, but like I told them, I don't expect much good to come from it :p

Yeah i just wanted to tell you not that a new player does not know it ;)

So better we just close this topic ;)

Thanks for your fast "support" ;D

If only there was a close function, haven't bothered with it yet XD