I'd like to play this game a lot more again, and avoid buying Q3A and setting up defrag.

Problem is: there are way too many maps, with no real discernible way to figure out which are any good, or how difficult they are. Outside of the author of the map simply naming them a certain difficulty of course.

It would be pretty sick if you could sort the levels/maps section of this website by most downloaded, most played, maybe give them a rating system, like out of five stars or thumbs up or down, and also maybe an easy-medium-hard scale that the players can vote on.

I know development of this game has stopped but for those of us who are left and want to play until the next iteration I think this is pretty essential, and maybe not that hard to do? I don't know, I don't know shit about web design.

Well, some of what you mentioned is here already:

Levels sorted by records (i.e. most played ones, etc): https://projectrik.com/rankings/levels/sortbyrecor...

All levels sorted by release: https://projectrik.com/rankings/levels (not really helpful in regards to what you're thinking about though)

As for figuring out how difficult they are, the easy-medium-hard gives a rough idea, and most maps (not the newer ones yet) also have difficulty ratings on their page. See bottom right corner of this image for an example: 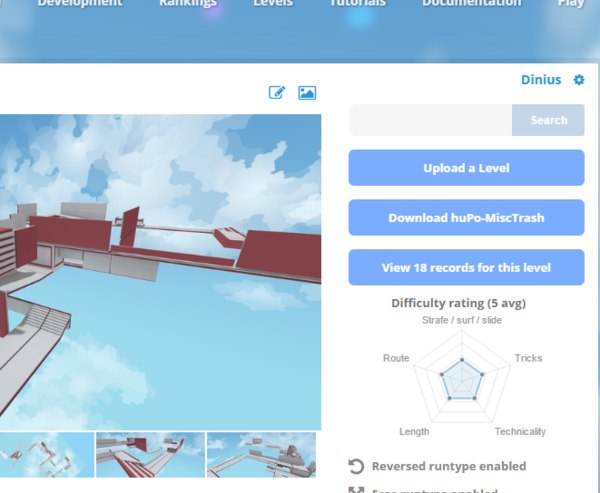 What would be relevant to include would be a list like the one that sorts by records, which would sort by the "averaged" difficulty rating of a map. I might add that actually, not a lot of work at all.

As for a "voting" type system, that has been suggested many times. But there has never really been that many players playing, and currently there's even fewer. Having a voting system where so few people vote is useless. Especially when you take into consideration that people will tend to vote relative to their skill level. I.e. the top X players might vote a map as "easy" or possibly "medium" difficulty on average, while most people might not even be able to actually reach the end of the map. Which in turn would lead to those people voting the map as hard. With e.g. ~5-10 people voting on a map with such diversified skill levels/opinions of the map, the result would be rather useless. If on the other hand there was 100-1000 players voting, then it would be a whole different story. But anyways, because of that, I went with the non-voting difficulty rating that you see above, which imo works fine for what you're after difficulty wise (but not for how-good-it-is).

As for download count, that's a bit of an issue with current implementation - not all downloads are routed through this actual server. Many of them are sent through a CDN (Content Delivery Network, for faster downloads, https://cdn.projectrik.com), and getting a count for individual file hits there would cost a bunch extra, hence not worth it. But nevertheless, I started counting downloads anyways some time ago, so here's the most downloaded ones (which probably matches pretty good with the actual popularity and records set, even though the numbers aren't correct)

Fast enough a reply for me, and this was much more helpful and thoughtful a post than I thought I would get. Thank you, this is all very helpful to get started playing again. :)

Note that most of the ones on the bottom (atm) simply aren't rated, I'll update some of them but I can't do anything about the ones I haven't played yet :)

e: also worth noting that this currently sorts only by the AVERAGE difficulty. E.g. suburb-gamma has a 2.6 (very easy) but has a 7 rating for strafe, meaning it is actually sort of hard.