Some links I foud with some handy info:

I also tried messing around with -bounce on the light phase, but it created unnatural looking light in corners & stairs.

Anybody else got some tips, links or advice for getting better results?

why do we even compile vis anyway? everything is mostly rendered all the time anyway.

almost, but regardless, the light compile depends on the vis stage, etcetc :)

Good point, but I haven't tried anything to do with that yet. I guess there are a couple of options:

EDIT: I can't find the prtviewer (I think it's a plugin) so hard to tell if the _blocksize thing works.

EDIT2: It's called prtview, but I can't find any info about it in darkradiant.

Making everything a detail does optimize your map a bit. I did it in pcpie-serv to make the file size 500 kb smaller

If you really want to go for best possible fps, you should separate rooms and if you're having a lot of detail, map according to proper tris.

Just to clarify something, making everything detail is _N O T_ the way to go.

Don't mean to make anyone look bad here, but I'll use pcpie's newest map as an example (blue). (again, hope you don't mind me using it as an example, just to make a point and it's the perfect example..) Everything was detail in this map. When I compiled it, the compile took 2208 seconds. That's more than 3 times the compile time of genesis, which is more than twice as big and has a lot more brushwork. When I made everything structural (which is the default), it compiled in 90 seconds.

So the moral of the story is: don't go making everything detail. If you encounter performance issues or other problems in certain cases, making parts of it detail can be a solution. But leaving the major brushwork structural is practically always a good idea. Currently the compiler makes some brushes detail automatically anyways, and I'll improve on this in the future. So please don't go creating new problems by using this feature incorrectly :)

As far as compile settings go, for basic usage, here's a comparison..

+ FYI currently almost all released maps, and all of mine, are just normal compiled. 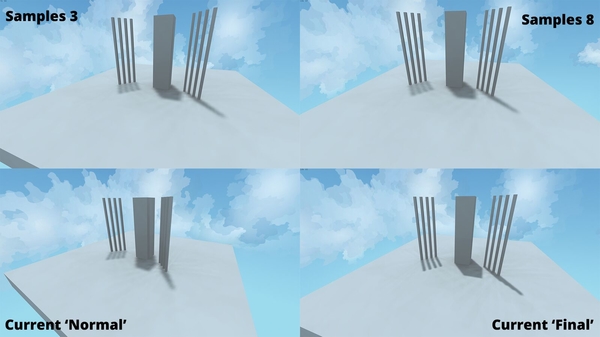 Final is the only nice looking one and even that could use some anti aliasing or something.

There's really no point in compiling a map longer than it took to even map it, just for sharper shadows that no one will be looking anyway.

I'm looking and so are a lot of players. Most gaming companies focus on graphics over gameplay so there's probably a reason for that.

Atm RIK only has colors and shadows to work with so ... Even more reason to make them look nice.

The reason gaming companies focus on graphics over gameplay is because their gameplay doesn't have anything to offer. RIK is all about gameplay and fuck the rest.

I highly doubt on that "a lot of players".