I thought making a little edit wouldnt hurt so i tried to set up rik for recording and i have some questions:

How do I load the demo form rik sp and not by dragging it to rikdev? When simply drag it it starts the playback and it loads up my normal cfg even tho i removed all the settings from default cfg and replaced them with dini's private 1337 *****movie.cfg*****

How to change timescale?

How to pause the demo immediately after it loads? I need to prepare some stuff before the record, set timescale and some other stuff.

What else could come in handy? I am going to record the demo at .25 timescale with fraps and speed it up x4 in vegas so I can have exactra frames for motion blur and in case if I need slowmo.

Is there a way to record the sound separately?

Playing recordings ingame: Place the .rikrec in Player/recordings (where they end up by default), then do /demo somename

The default.cfg doesn't get loaded unless you've done a reset of the settings. You generally want to create a new config named movie.cfg and put stuff in there, and do something like this: 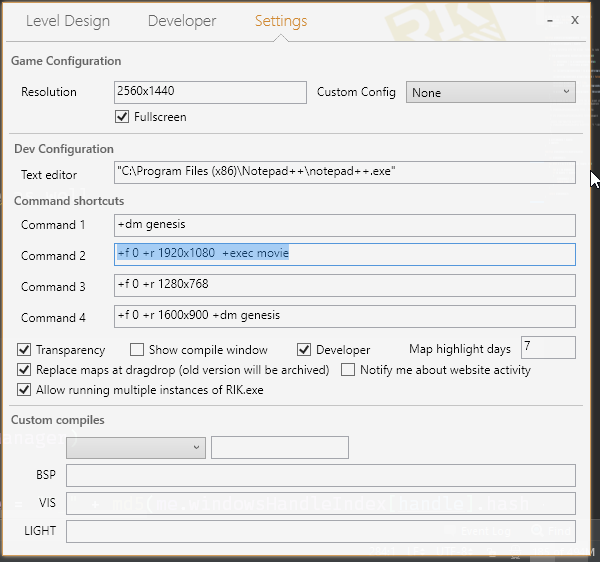 This way you can launch RIK in "movie mode" by clicking e.g. the cmd 2 button: 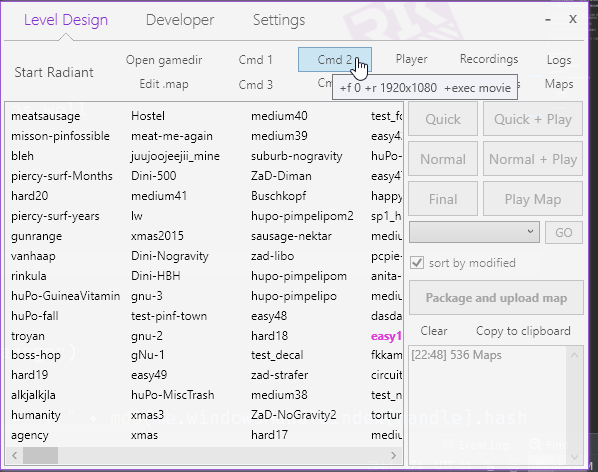 When you're playing back a demo, you can use wasd+space(jump?) to control the timescale, iirc it's like: w = speed up, s = slow down, d = default speed, space = pause, a = maybe nothing atm don't remember. The actual setting for timescale is movie_ms. If you write movie_ and press tab you'll see some other options etc.

Iirc there's some setting to prevent the autostart, possibly in the movie_ list if you press tab.. Otherwise it should work fine if you do /movie_ms before it starts I think.

If you're gonna record it at slower speeds you'll need to re-record it at normal speed to get the sound, can record the sound directly using e.g. audacity and so forth. .25 timescale would be movie_ms 2 btw. (No clue if actually speeding up sound recorded at slow speeds would work at all (if it even plays sound then?))

Nice reply, thanks. And no speeding up the sound isnt a good idea i think :D

I hope you edit the video better than your cs videos which couldn't be more cancerous editing.

Damn... Just watched some videos and it's like he just googled how to montage and put everything from the first page of results into a 30 second video.

On the other hand, rik montage would be cool.

it will be very clean