Mostly everything game related is ready now, working on installer/updater at the moment. Will probably start sending around the last private alpha in a day or two :)

Synced up the development version of the website to the main server. A ton of bugfixes, ranking system finished, no more wordpress anywhere, and so on.

Will most likely release the last private alpha within a week or so. Assuming that goes ok, we'll go public very shortly afterwards ;)

I've also started uploading updated versions of some levels. Adding shootpoints, adapting some of them for weapon runs, and fixing some textures that have gotten their names changed and such.

The record system is empty for the moment, but here's a little sneak peek: 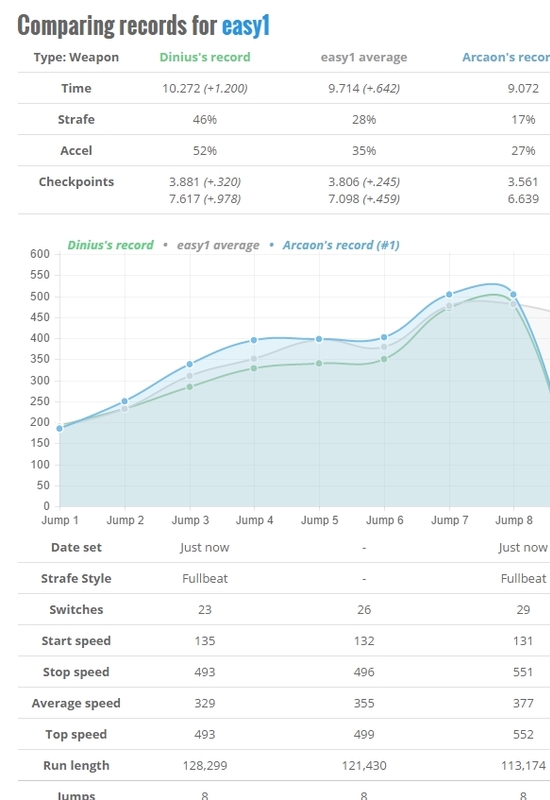 (the records above are obviously bogus though, Arcaon 1.2 seconds faster than me, yeah right..)

I'm going to spend some more time working on the website than previously planned.This basically means moving away from WordPress as the 'system' for the website. The main reason for this is to implement a vastly more sophisticated (and extremely high performing) caching system than wordpress has to offer. It's not like this is an issue at the moment, or will be any time soon, but since I'd rather make it “properly” from the start rather than having to do a lot of the work twice when we'd actually start needing the added performance.

So, this basically means a couple more weeks until the next alpha. So sorry for that, but it just means it'll be all that much better when it does come :)

That being said, the record system itself is roughly 80% done at the moment, so most of the stuff is in place. But the whole moving away from wordpress presents quite a bit of extra work. Already did it with the forum, will now have to do it with everything else as well. So be patient a little while longer. Am working on stuff with basically every free minute I've got, so give it a couple of weeks or so.

Will post news on the forum as well as the main page from now on :)

The forum has been replaced: http://projectrik.com/forum/new-forum

Added the level system, started a little bit on some documentation, and generally a lot of other stuff: user profiles, actual private messages, and so on and so on..

Next up is the “play” page and the record system. Documentation and tutorials will be added continuously bit by bit.
Again, when things are ready, probably close to the end of February, we'll release the next alpha :)

Work is still being done on the website, so expect more changes and some temporary bugs here and there.. Feel free to let us know on the forums if you encounter something we might not know about!

The levels, tutorials and documentation sections will be put up over the next couple weeks or so.

Then afterwards the records and “play” sections will be made available as well (when they're ready, that is), together with the next private alpha release.

The timeframe for the public beta depends largely on how good that alpha release goes. But when the bugs are ironed out and so forth, we'll go open beta :)

It's still in the early stages, more features will be continuously added the over the next days and weeks.